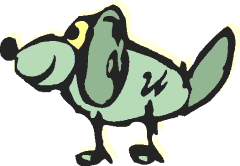 The dog darted frantically around Aaron’s feet, bounding back and forth, jumping up on its hind legs, and smacking its tail into his legs. Every move was accompanied by a droopy, drool caked grin. Aaron loved playing with happy dogs, but something about this one seemed… off. He couldn’t quite put his finger on what was different about the dog, but he pushed that feeling to the back of his head and continued to play with it.

“Awwwwww who’s a good boy? Who’s a good boy?” Aaron cooed. The dog rolled on its side, tongue dangling from the side of its mouth. Aaron reached down to give it some sick rubbins, but the pets weren’t like the average pets. He rubbed the side of its belly and it felt like bare ribs. Not just on its chest, but going down the whole length of its underside. The pets became slower, more cautious. The dog growled and snarled, dopey grin replaced with white foam and bared fangs. Aaron resumed petting at the initial speed and the dog’s carefree demeanor returned.

The hours began to tick away, but still Aaron rubbed. People walked past, either ignoring him or giving a brief smirk at the cute little pup. Aaron wanted to call out to them, to grab someone by the shoulder and plea for help, but his mouth was stuck making baby talk. His hands were stuck petting. The dog’s tongue hung from the corner of its mouth as it softly panted.

Day turned to night and the pup rested, it’s little legs kicking in the air. Now was his chance. Aaron slowed down his left hand as his right still pet at full speed. He cautiously pulled away his left hand, then slowed and removed his right. Aaron stood up on his toes and pivoted away from the dog. He crept forward at a snail’s pace, each step noiseless. A sharp sniff. Aaron turned around to see the dog, fully awake and staring at him with its sunken, sullen eyes. It didn’t grin. No tongues drooping or tails wagging. It only stood there, completely motionless.

Aaron backed away slowly. The dog began to growl. No, not growl. Hum? Could dogs even hum? The pitch of the noise became sharper and more high pitched. It wasn’t a hum, it was a buzz. The dog flew forward, wings ripping through the flesh in its side, tail erect. Before Aaron could react, the tail was embedded into his chest, piercing his heart.

The dog’s tail was engorged with Aaron’s fluids, draining his essence ounce by ounce. The dog’s wings receded, becoming flush with its body. A layer of skin and fur stretched itself out to cover them. The dog removed itself from the shriveled husk of Aaron’s corpse and scampered away, tail wagging and tongue drooping in the pale moonlight.