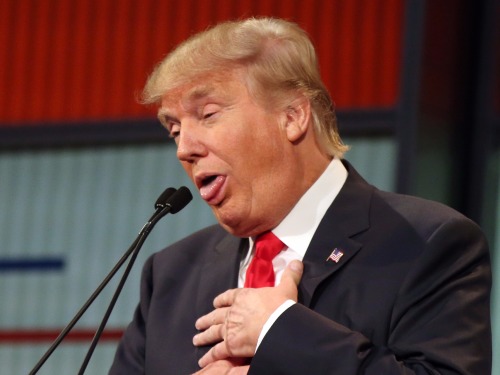 Hey, America. It’s me, Donald Trump. I’m here to tell you a little bit about my plan to make America great again. It’s really a great plan, if I do say so myself. But, alas, the mainstream media is hellbent on taking my words and twisting them around to make me seem like some kind of monster. But hey, you know me! I’m not a monster! I’m just a great, smart, handsome, funny guy who is about to be elected as the greatest president ever! Let me just educate you people on why my plan is literally the greatest possible thing that could happen to America ever forever times infinity.

You know what I don’t like? Terrorists coming to America and blowing up our buildings. You know 9/11? I don’t like it at all and I doubt you do either. I think that it should be up to America to stop the terrorists from coming in and doing more 9/11. You know who is letting terrorists in by the thousands? Barack Hussein Obama. Now, I’m not saying all of the terrorists that he is letting in are gonna blow up our 9/11s, there are probably some good Muslims or whatever mixed in with the terrorists, but if just 9 out of 10 of those terrorists plan on bombing a building it would be like 9/11 times a zillion. I don’t wanna let that happen and there is only one way to stop it.

Okay, you know those Muslims? I think they’re fantastic. They’re great, with their turbans and hoodies and whatever. I’m friends with a great many Muslims and I would even go to a Muslim wedding if one of them asked me. But it’s not my fault that Muslims look like terrorists. If I had my way, we could come up with a way to let people know which turban wearing dude is a Muslim and which one is going to go bomb something. Oh, wait. I already have one of those plans because I am a genius.

You know what is the safest place on the planet? Right. Supermarkets. And you know what we do to keep cans of soup from the supermarket from being taken when they aren’t supposed to? We put little barcode thingies or whatever on them so they go beep beep whenever someone takes them out the store. That’s we’ve gotta do. Give the Muslims the ol’ Campbell’s treatment. We take all the Muslims, give them an ID, tattoo that ID on them, and then put them in their own beautiful little Muslim towns where they can do Muslim things without harming us Americans. They’ve got everything they need! They’ve got mosques and food and water and holes to shit in! And if one of them proves to be good? Give ‘em a scan and send them on their way! Then, when one of us Americans sees somebody walking down the street with a turban or whatever, we can assume that they aren’t going to explode and we can treat them like a human instead of a person-shaped bomb! We don’t get bombed and Muslims get treated just like they’re normal people. It’s a win-win!

Yeah yeah, the PC police is gonna whine about this one. “Oh please, Mr. Trump! Stop it! You can’t do that to people! We love terrorists and killing babies and want America to be destroyed!” But you know what? I can do whatever I want to protect the American people and that’s what I’m gonna do. Syria? Build a wall out of TNT and blow it up. Putin and the Russians? I’ll deal the shit out of them until they beg me to never make a deal with them again because it won’t be as good as the amazing deal I just gave them. China? Oh, don’t even get me started on China. I have the best plan ever to deal with China and when you hear it you will be blown away by how amazing it’s gonna be. Do you think that Hillary Clinton or Bernie Sanders or Jeb!or… uh, one of those weird-looking ones can do any of this? Puh-lease! I’m harder, better, faster, and stronger than all of those other guys. It’s like I’m of some kind of superior race or something. It’s ridiculous! Just imagine how great the world would be if everyone was exactly like me! Hell, maybe the best way to make America great again is to take everyone who is just like me and just getting rid of all of those people who aren’t as good! Eh, I’ll figure out that plan later. Now I’ve gotta focus on winning that election, although I’m so great at being elected that I don’t have to try. See you in the White House!