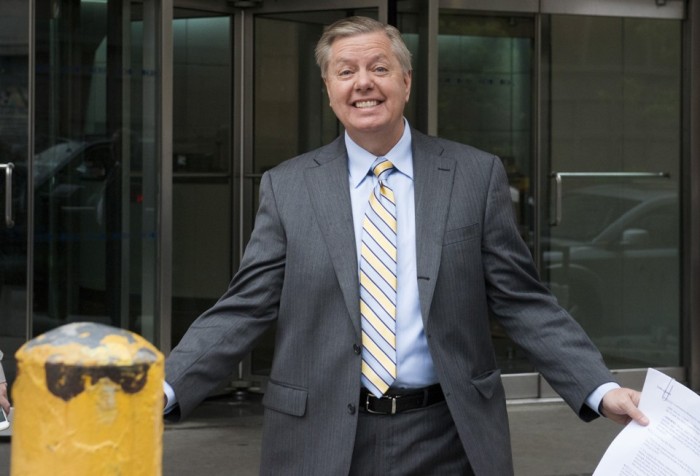 “Bombs over Baghdad!” Lindsey Graham sang along to his favorite Outkast song as he drove into the Capitol Hill parking lot. He skidded into his spot, which had “Lindsey Graham!!!” bedazzled on the sign, and opened the door before the car was fully parked. Today was going to be a good day. Today, the United States was going to war.

Inside the building, Lindsey sashayed towards his office. The other senators and congressmen that passed by gave him strange looks, but he ignored them. He was revved up and ready to do some war, and no silly little men were going to distract him from that.

He sat down in his office chair, made of fine red velvet with “Lindsey Graham!!!” bedazzled in the seat and got down to business. “Who are we going to attack today?” he wondered to himself. “Syria? Libya? No, those are too easy. Let’s bomb Iran! They’re probably making nukes or something. .  Hmm… are there any rabblerousers out in Nevada we can throw some troops at?”

Lindsey’s secretary, Mr. Plissken, stepped into the office and gave him a wide smile. “Sir, we can’t just think in normal terms. We’ve got to get creative in this day and age, you know? Sadly, we can’t just find some place in Asia and send them a bunch of bombs anymore. We have to find a war that everyone can get behind!

“So like, the War on Drugs?” Lindsey stroked his peachy chin hair and pondered for a moment. “The War on Drugs was alright, but I’m more of a War on Terror man myself.  Is that one still happening or did we win it?”

“Your guess is as good as mine. You could try to start a culture war,” Plissken suggested.

“What do I look like, Pat Buchanan or something?” Lindsey stood up from his beautifully bedazzled chair and struck a heroic pose, throwing his arm to the sky like he was about to take flight. “No! We need to start an even greater war than we could ever imagine… The War on the Four!”

“The War on the Four?” Mr. Plissken asked.

“Yes, the War on the Four. The four bad things that nobody likes and everyone wants to get rid of; Disease, Poverty, Inequality, and Injustice.” Lindsey smiled keenly at his own clever insight into war making. This sudden burst of inspiration filled him with a joy he hadn’t felt since the last time he met– No, let’s not go into that one this time.

“But sir,” Plissken began. “How do you, er, fight a war against those things?”

Lindsey shrugged. “I dunno. Send some troops to give women equal rights and stuff like that. That sounds good to me. Then we can go shoot the flu or something,”

“Congress would never, ever agree to this. But I like the idea.”

“Well, when we have a big ol’ sourpuss like Barack Obama in office. He wouldn’t declare war on a fox if it ran away with his whole damned coop. If only there was someone like me in there to…“

“Well, I’m sure honored to be talking to the future 45th President of the United States.”

“Why, yes you are indeed,” Lindsey hopped down from his chair and dragged it over to the kitchen counter on the other side of the office. He broke it over the counter, tossed the wood and bedazzled seat onto the stove, and turned on the gas. “I’m making some s’mores. You want some, dear?” he asked. Mr. Plissken nodded.

Lindsey took out some marshmallows, a bar of chocolate, and finally, a package of graham crackers. He looked at the crumbly, cinnamon speckled crackers, and felt something of a connection to them. These crackers were the real substance of any s’mores. They hold together the chocolate and marshmallow goop and protect poor, defenseless fingers from its warm, sticky tyranny. Graham crackers also were probably great battle rations.